I will continue where I left off in my instrumental profile work because that work is very relevant to the work I will discuss now. You'll have to check that out before you can fully understand where I am coming from here. Here, I will focus on the validity of characterizing my fixed IP from the cross-dispersion direction. I do this via our first radial velocity results.

The radial velocity we measure is the reflex motion of the star induced by the gravitational pull of its planetary companion. This motion is accounted for in Kepler's laws. Kepler's laws suggest that the lower limit of the planetary mass can be described as $$ M_p \sin i = K\sqrt{1-e^2} \bigg( \frac{P M^2_*}{2\pi G} \bigg)^{1/3}, $$ where \(M_p\) is the mass of the planet, \(i\) is the inclination, \(K\) is the RV semi-amplitude, \(e\) is the eccentricity, \(P\) is the orbital period, \(M_*\) is the stellar mass, and \(G\) is the gravitational constant. We use EXOFASTv2 to constrain the spectroscopically derived planetary parameters, such as the planet's orbital period, RV semi-amplitude, and minimum mass. Before the minimum mass is determined, the RV semi-amplitude must be extracted from the Doppler-shifted spectra via a forward modelling procedure. This is why I worked so hard on the instrumental profile. In the forward modelling procedure we use my newly developed fixed IP and subsequently extract RVs.

For the first time, we can now determine the radial velocity precision of MINERVA. To do this, we use MINERVA observations of HD 122064. HD 122064 is chromospherically inactive, has no known companions, and serves as a convenient RV standard star. To further validate our radial velocities and the fixed IP, we derive planetary properties of 51 Peg b from MINERVA observations of the 51 Peg (HD 217014) system.

The radial velocities for HD 122064 taken with one telescope are presented in Figures 1-4. The data were taken during the months of May and June of 2016. After extracting the RVs from the pipeline, we use an error-weighted, overlapping Allan variance to determine our precision. (See Figures 1-4.) This metric is helpful in determining if the data is contaminated with correlated noise or if our precision has hit a systematic noise floor. As a function of binning, the data deviates from the white noise (solid black line) and is dominated by other noise beyond a binning of six for (coincidentally) both the fixed IP and our conventional sum-of-gaussians IP. At this binning limit, we get a precision of 1.8 m/s with the fixed IP and 1.9 m/s with the sum-of-gaussians IP. This implies that my unorthodox, fixed IP is doing equally well as an IP that uses a gaussian-like profile and characterizes the spectrograph's instrumental profile from the dispersion direction. 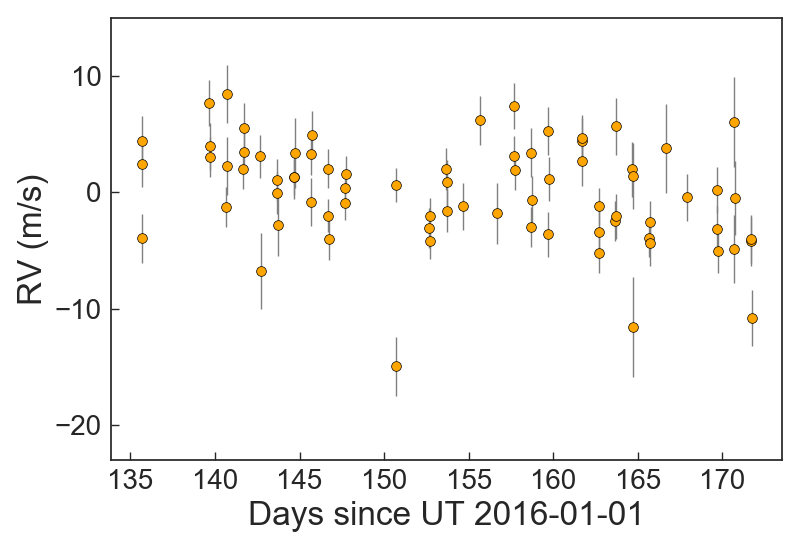 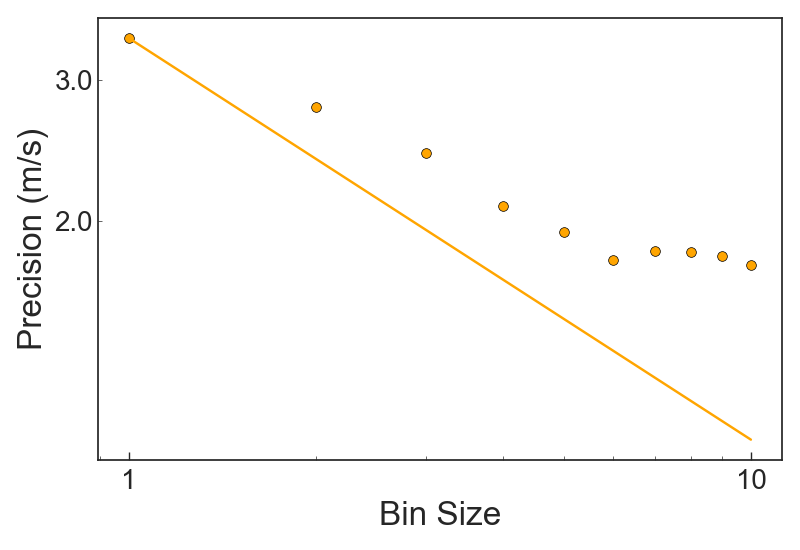 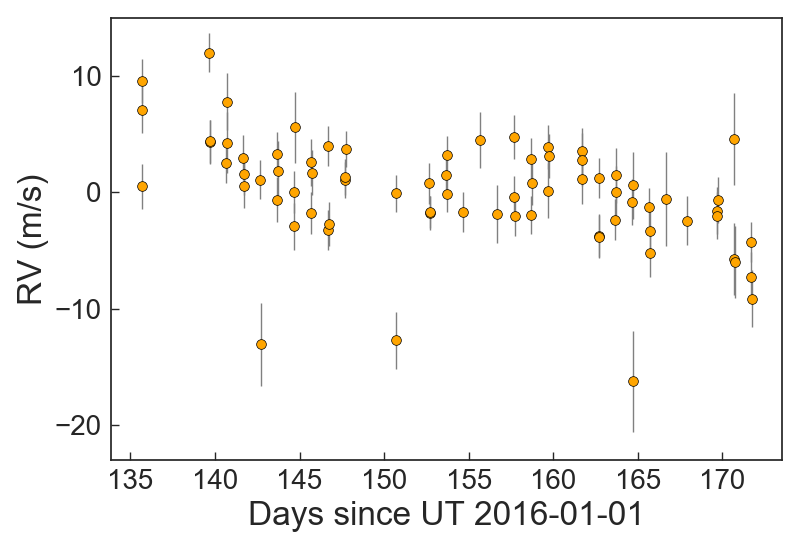 Figure 3: Same RVs as before but data is now generated from RV pipeline with the conventional gaussian IP.
4 / 4 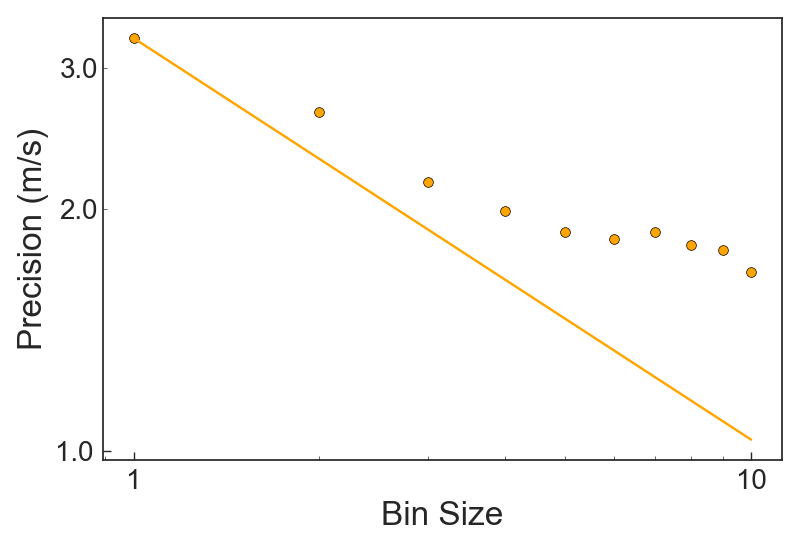 MINERVA observations of 51 Peg were taken with one telescope in October of 2017. Again, we use the fixed IP and extract the radial velocities. With such a unique IP used in our pipeline, it is wise to see if our radial velocities can confirm the existence and characteristics of exoplanet systems. The unbinned radial velocities and EXOFASTv2-generated orbital solution are illustrated in Figures 5 and 6.


The star-, planet-, and telescope-dependent characteristics are listed in the last table. The "EXOFASTv2" column states the median values and 68% confidence interval for properties derived from MINERVA observations. We compare our results with the most quoted quantities for this system. These quantities under the "Reference" column come from the Butler et al. (2006) paper. Values not reported by that paper are marked with ellipses. For the parameters that have a value and errors reported by the Butler paper, we state the discrepancy between our values and theirs in terms of 1\(\sigma\) uncertainty. We define this discrepancy as $$ \Delta\sigma = \frac{ N_1 - N_2 }{ \sqrt{ (\sigma_{1,L})^2 + (\sigma_{2,U})^2 } }, \textrm{when } N_1 > N_2, $$ in which \(\sigma_{1,L}\) is the uncertainty on the lower end of the parameter's 68% confidence interval for value \(N_1\) and \(\sigma_{2,U}\) is the uncertainty on the higher end for value \(N_2\). Ideally, the discrepancy should be below 1. Seeing as the discrepancies evaluated for the tabulated parameters---most importantly the radial velocity-derived planetary parameters---are \(\lesssim 1.0\), we find good agreement with results quoted in literature. (See the eccentricity, orbital period, RV-semiamplitude, and the minimum mass.)

This is great validation for the success of my fixed IP. Furthermore, I characterized 51 Peg b using RVs extracted via a different, third IP that I have yet to mention. (The details will just bore you.) The IP gave great RV precision but the RVs produced inaccurate exoplanet properties. Therefore, because my fixed IP maintained reasonable precision and accuracy, I conclude that my fixed IP did better than or equally as well as the other two IPs available to use in our RV pipeline.

For the past 2.5 years, I have substantially modified our telescope control software and our Doppler pipeline. For the pipeline, I have determined the stability of our spectrograph's instrumental profile by using a time-independent IP. From there, I extracted MINERVA's first high precision radial velocities and determined the current radial velocity precision. I validated my use of an unorthodox IP that was characterized in the cross-dispersion direction by getting the same RV precision as a conventional IP from RV standard star observations. This was also confirmed by accurately and precisely characterizing the very well known hot Jupiter, 51 Peg b.

Our goal has always been to obtain a radial velocity precision of less than 1 m/s. This goal is still within reach. (Although, 1.8 m/s precision isn't bad at all.) We originally thought that our characterization of instrumental profile was the reason for our previously inaccurate and imprecise radial velocity measurements. Now that I've done all of this work and managed to get the precision down to 1.7 m/s, we are looking for other factors in our pipeline and instruments that may have a dominant impact on our current precision. Our potential culprits include moonlight contamination, poor stellar templates, variable tellurics, and more. We are continuing to investigate and suppress factors limiting our precision. In the meanwhile, I'll be writing the paper for all of this work. Once published, this paper will mark MINERVA's first of hopefully many achievements towards its primary RV mission.